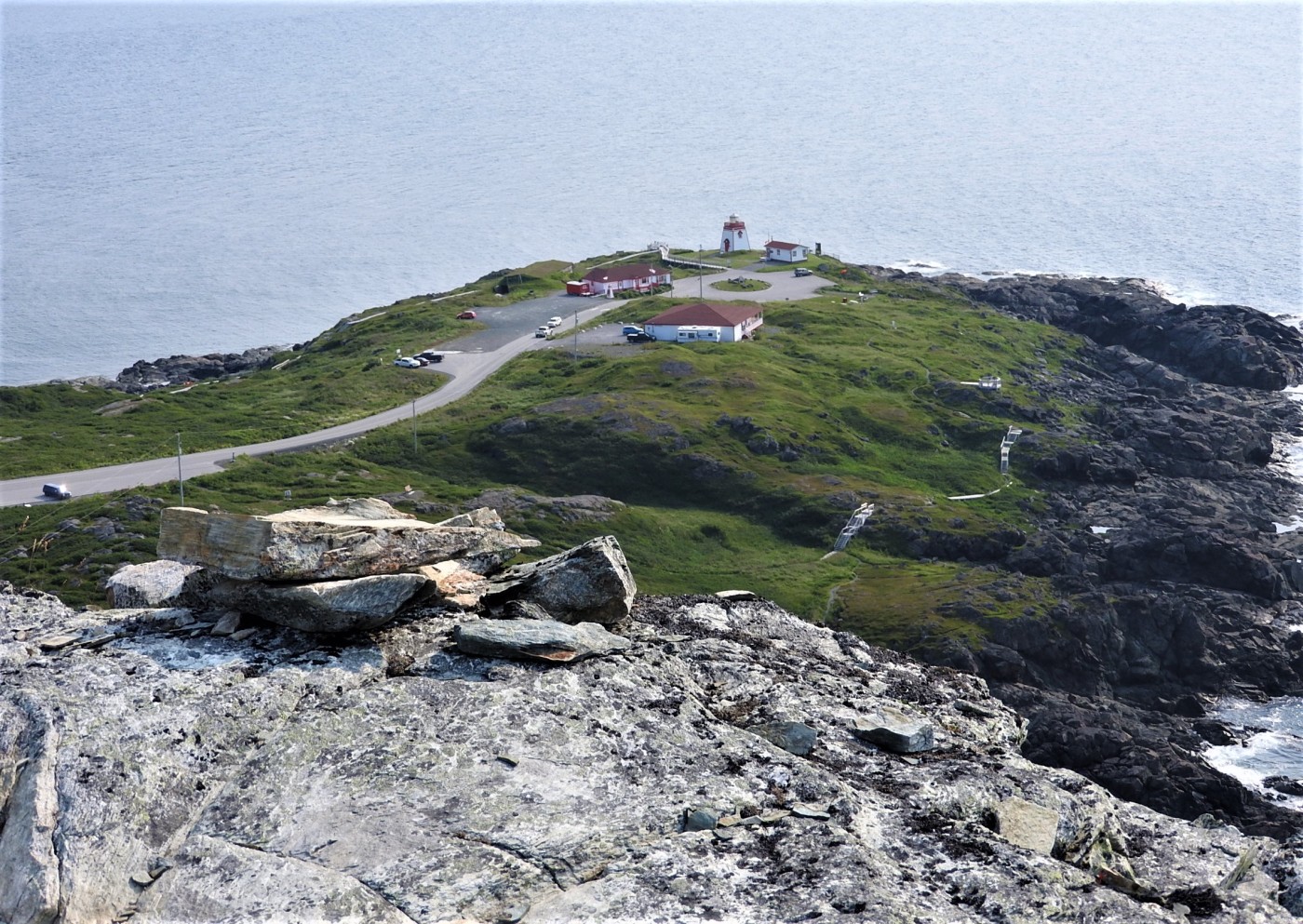 When my sister visited Fishing Point Municipal Park in St Anthony, Newfoundland, several years ago, she told me she felt like she was standing at the edge of the earth, and she became emotional from the experience. I want to feel that too by clambering up the 400 stairs of the Daredevil Trail where I will have a good view.

I can see the zig-zag staircase up the side of the cliff as I drive towards Fishing Point Municipal Park. I passed two ladies out walking along the road, but it is not quite 7:30 A.M so the park is quiet. I am here at this hour because St Anthony is under an unusual heat advisory: the area is expected to reach 29 Celsius today. Yesterday, I was unable to purchase any ice for my cooler, the entire town was sold out. The lady at the gas station said, “This is very rare, for St Anthony.” In spite of being oceanside and early, it is very warm and the sky has been hazy for days with smoke drifting on the jetstream from fires burning out west.

“Better get at it Mac,” I say aloud to myself. If I want to get up those stairs without suffering too much it is now or never and I reach across to the passenger seat and grab my day pack.

There is a man in his senior years staring up at the sign as I approach the trailhead.

“Good morning, are you going up the Daredevil trail?” he asks.

“Good morning to you sir. Yes I am going up,” I reply.

“I’ve done it five times, I think I will join you,” he invites himself.

I hear the little devil on my shoulder say “I wanted to use this hike as my morning PT and get my heart rate up.” My little angel is whispering, “He is lonely and only wants company, so play nice.”

“After you sir, lead the way,” I accept his invitation. He puts his hand on the railing and strides up the riser. I follow behind him. At the second landing he stops and turns to have a look outward at the community. He tells me he has lived and worked in St Anthony all his life. Married- had a son and a daughter. On the next landing, he takes a deep breath and tells me his father was attached to the radar station that operated in St Anthony, “It’s all gone now, closed in the 60’s,” he says turning to proceed up the stairs again.

We do three more flights but he chooses not to stop. Being a fitness leader for the military, I recognize pride and I can see he is getting tired, his breathing is getting heavy and he keeps wiping perspiration from his forehead. “We are in no rush, catch your breath,” I encourage him.

We keep going, He tells me his wife’s family were from Roddickton, He and her met at a dance when they were young. I feel he wants to say more on the topic but he doesn’t, instead he drops his head and moves towards the stairs for the final approach. “We are getting close now!” he yells out, breathless. I stay several steps behind so he doesn’t feel rushed. “You are just a regular tour guide,” I say. He laughs and takes the moment to pause. Stepping to the railing he points out the lighthouse and mentions Dr. Grenfell’s house and museum. “I passed it on the way here but it was closed,” I shout out, maybe a little to loudly seeing a hearing aid in his left ear for the first time. With a determined look in his eye he strides up the last of the stairs. Stepping onto the rocky path, he bends a little forward, I can see he is relieved to be finished with the stairs.

Lo and behold there is a lady sitting on a bench in front of us and he knows her. He greets the lady with surprise then turns to me and says, “We used to work together.” While they have a chat about old times, I excuse myself to go take some photos from the top point.

I try capturing myself in a timed photo but the angle is wrong and the point is very high and I am not so eager to go too close to the edge just for a selfie. I crouch down and grip the ground tightly and wait for the timer to click. It takes four tries before I am satisfied with a photo. I trudge back down to the two friends. they have just about run out of conversation and he says to me, “There you are, let’s go back down this way.” He points to his left. I reply with, “I don’t know that way.” I ask the lady, “Is there a path that way?” Her face registers a grin and she turns her head side to side and says, “I have never gone down that way.” He replies with, “Well it can’t be that hard,” and walks towards the other side to look for an alternate way down. The lady whispers to me, “He has dementia. His wife died last year, poor soul, he gets confused.”

I nod, understanding what she is trying to say to me. He comes back over and says, “Let’s go.” I hold my own. “I am going down the way I came up.” He gives in and heads for the stairs. We stop on the way down only twice, he rubs his knees and I again suggest he take his time, “I don’t want to have to carry you down,” I joke and he laughs. We make it to the bottom.

He stands at the sign, just like before we went up, and says, “I have been up there five times,” and I say back, “Now you can say you have been up six times.” He smiles and says, “Let’s go do the shore hike.” Without waiting for me he turns and starts walking down the path. I shout out. “I can’t, I am on my way to the Big Land, of Labrador, I have a ferry to catch. It was nice to meet you. Be careful!” He waves then turns and continues his walk. I return to the truck and drive to the lighthouse and stand on the end of the point – the edge of the earth? it sure looks like it to me.

Season is June 1 to September 30th.

Please join me again as I head to The Big Land of Labrador.

No money or perks were received for this post, It is just my own experience

If you enjoyed this content you can tip me to show your appreciation.