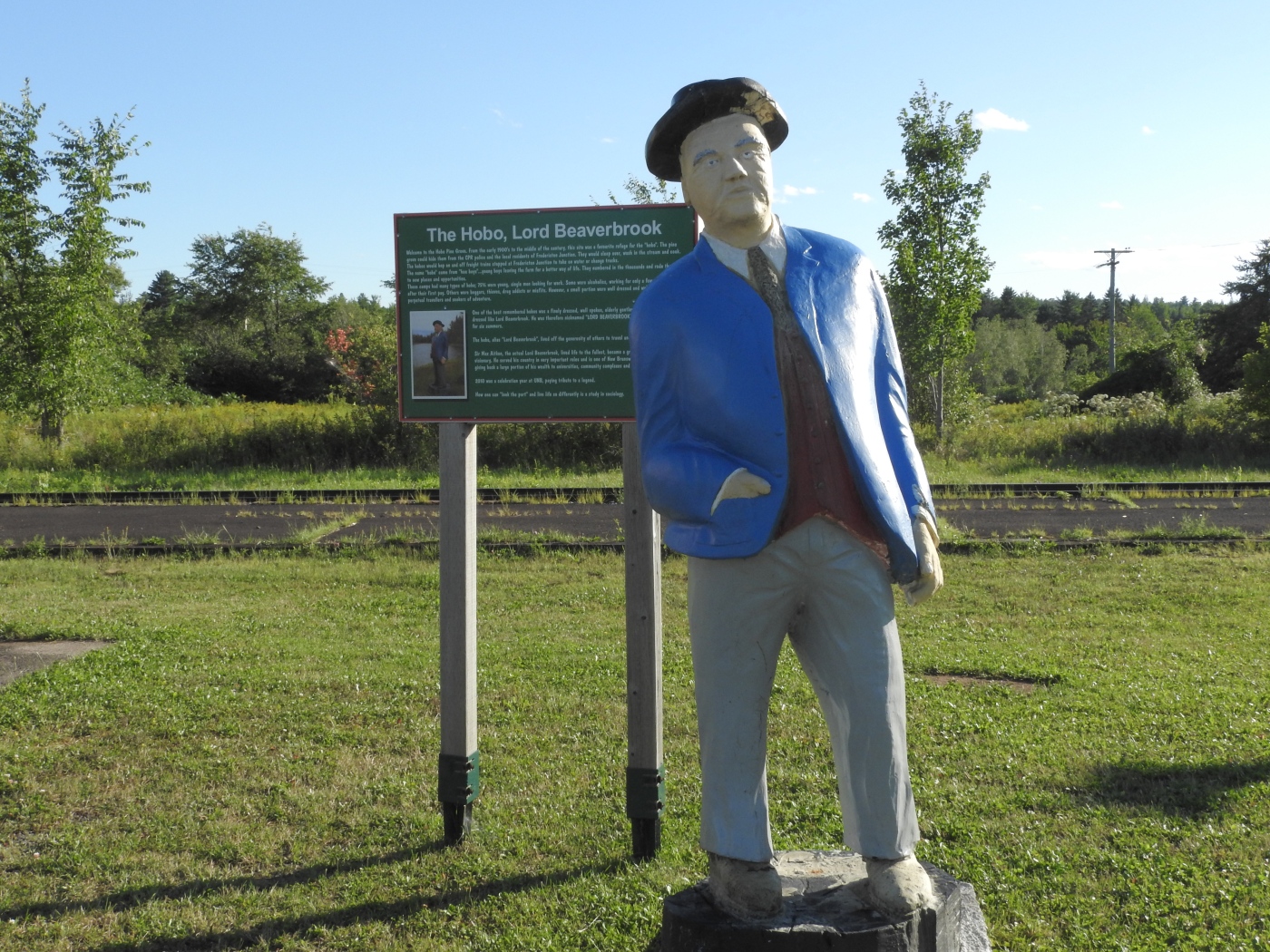 Often while following one story, You Traveled Alone? I will fall into several others; A Venn diagram of travel. It was in Fredericton Junction, a sleepy community within a stones throw of my home, that this crisscrossing of history, geography and a fascination for the oddities, happened.

As its name suggests, Fredericton Junction was long ago an important hub of transportation.  It had the main road linking Saint Andrews with much of the populated areas of New Brunswick and the rail line. The New Brunswick tourism guide gives the village a one paragraph description, attributed to the Currie House. It is described as a historical property surrounded by trails that led through a stand of old growth white pine. Some carvings have been assembled at various location along the trails, Voila Art in the Park.

The house is closed for the season of course, but I am here for my daily walk. This will save me a trip to the Beaverbrook Art Gallery for my cultural experience. My boots  punch through the snow as I find the trail and enter the woods. There are a couple of other foot prints, but I dare say, I am one of very few that have been here this winter.  I am surrounded by lovely tall straight pines with substantial circumferences. They are lucky to have escape harvesting in this province.

On a small wooden bridge I stop.  A sad tale is written about a carriage horse, that is said to still appear on the road. His owner was unable to free his beloved animal from his harness after the cart tipped into the river.  He is the ghost horse.  I keep an eye out for him. If this horse is going to haunt someone, it will definitely be me. 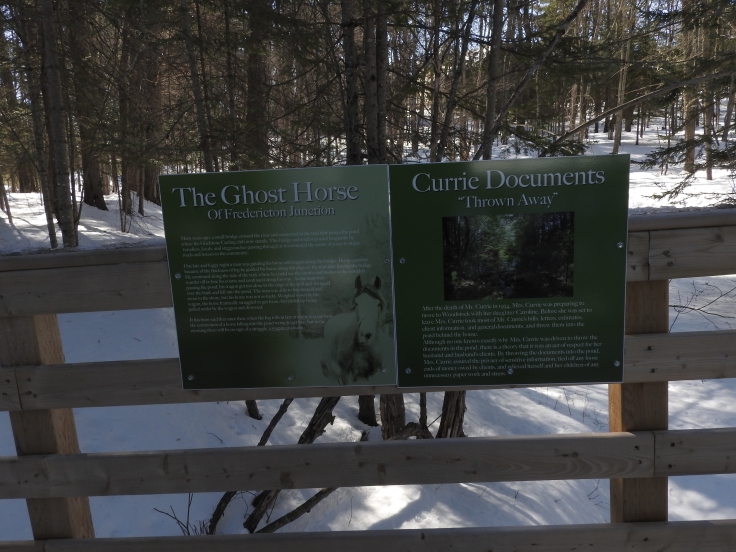 Further into the woods I press. The other set of foot prints that accompanied me disappear.  I break trail forward.  I come across the most out-of-place and wonderful surprise.  It has occurred to me that I may never get to Easter Island, so here is my snow-covered Moai experience.

The forest darkens with the tree cover and I am starting to think the person who put this art festival together was a bit morbid. Weren’t the people of Easter Island cannibals?

the river breaking through its ice encasement. I stopped a moment to hear its power and search for the horse. There are a few more art pieces on the last part of the trail. I will leave you to investigate it on your own. I am not done with Fredericton Junction just yet. I check my map and see that I have a few other notations marked. I think I will try to see them while I am in the area.

I pass The Hobo, which is another road side attraction in this community. (this picture is from last summer) During the years when the train stopped in the community, this section of the rail line was famous for attracting the homeless. They lived in camps by the tracks and bathed in the river. Many were unemployed, alcoholics and down on their luck. However one exception was an affluent well-dressed man who rode the train as a hobo for adventure.  He was given the nickname Lord Beaverbrook and the story is written here to remember his life. From the Hobo I am on to the Peddler.

Diamond Square Road, is only 3 or 4 minutes from the main road. The Peddler is not just a road side attraction, but an actual person that was murdered in 1885. He was a cattle dealer from one of the St towns,  St Andrews,  St Stephen or St George take your pick. He would buy cattle from local ranchers, herd them to Fredericton junction, then sell them to further markets using the freight line to ship them.  After a prosperous day of deal making. He decided to stay the night at an Inn along the main thoroughfare.

While engaging in drinking and gambling at the bar with strangers, he blustered on about his success and being flush with cash.  The following day, on his return trip home, the Peddler was robbed and murdered by three men.  The story goes, that the murder may have gone unsolved, except a man in Montreal was being hanged and as he went to the gallows he wanted to clear his conscience to the priest. He confessed to the killing of a man in Fredericton Junction. He did not reveal his accomplices.

I see the sign that points to the Murder of the Peddler it says 2 km a head. However, the road is only plowed to the last house. I park the truck and take my camera 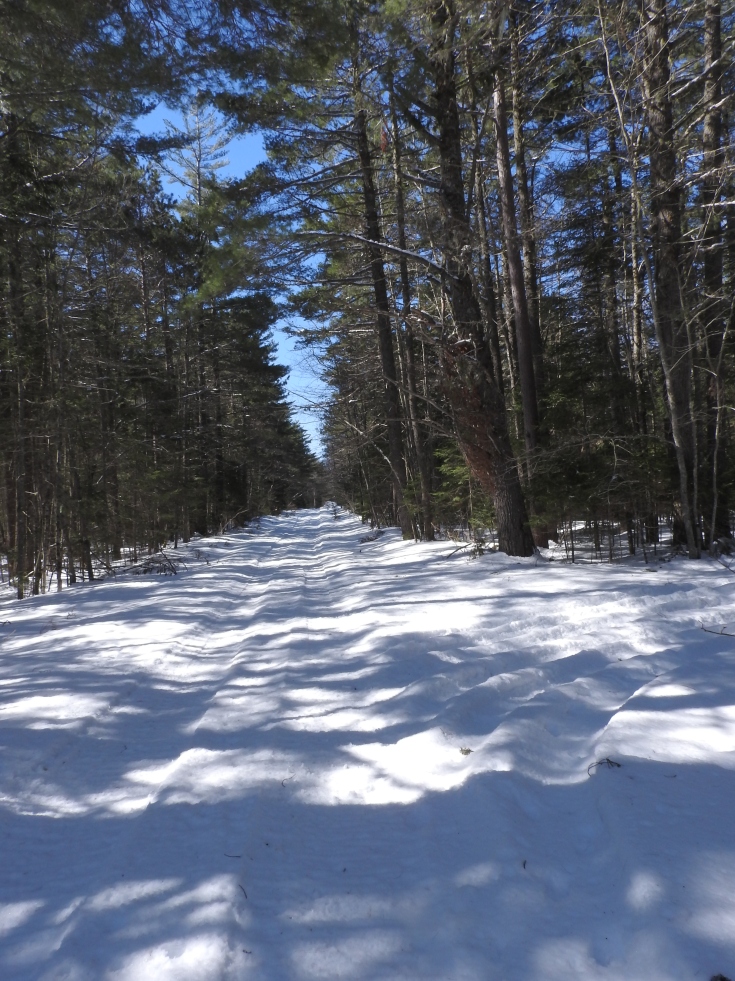 I have come this far, I will hike the rest of the way.  It is a clear cool day but there is no wind. The snow is hard packed, the road nothing more than a groomed trail. The further I progress the more deer track I see. My truck is long out of sight, and it occurred to me that bears are probably starting to come out of hibernation. Coyotes and wolves roam these woods  I keep vigil for any animal movements.  Not even a bird chirps, it is silent except for the crunch of snow under my feet.

I keep forward and make a deal with myself if I don’t come to it in the next ten minutes I will abort and come back in better conditions.   Just then I see it shows itself. 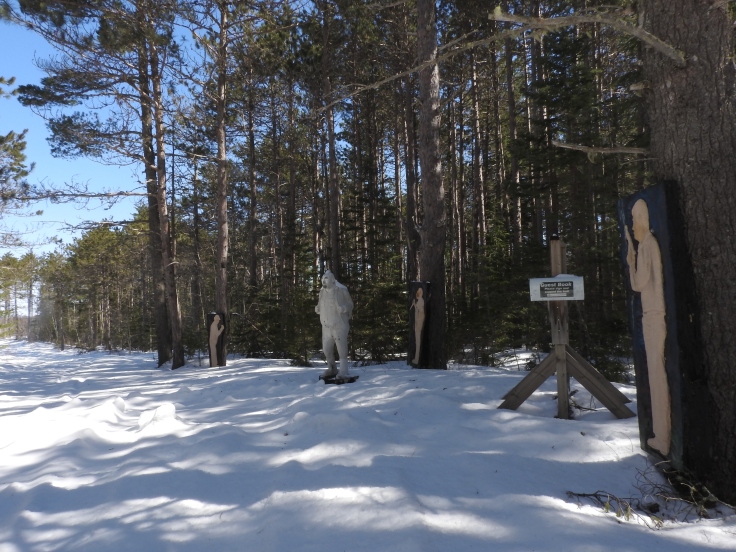 A statue of the peddler and his assailants ready to murder him. A story board tells of the event. His grave is marked by a stone further on up the path but I can’t see it, It is probably covered by the snow. 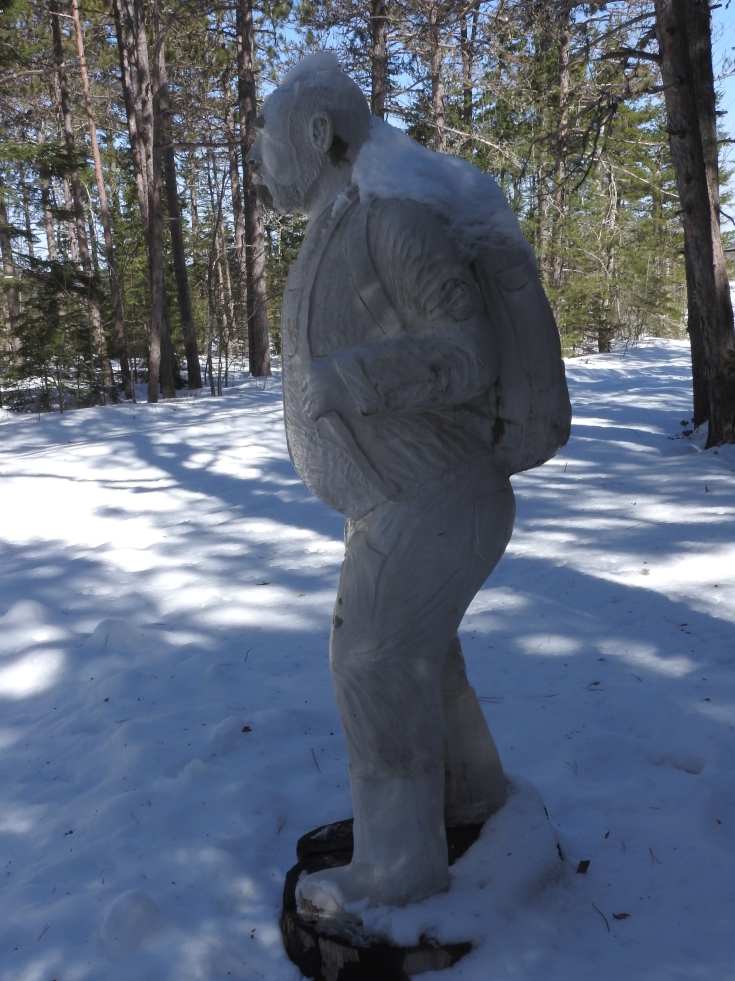 Inside the mail box is a notebook. I sign my name and pay my respect to the long gone but not forgotten man, who was murdered in the woods of Fredericton Junction.

Now you know that a murder, a moai and a hobo are all roadside art attraction in the unassuming community of Fredericton Junction, New Brunswick. I shall have to speak with the people at the  tourism bureau. They have overlooked these spots as tourist attractions in their brochure.

I must say this treasure hunt was most enjoyable.  I didn’t just drive up and take a pictures. I had to work for each one. The hiking through the snow and a bit of an adrenaline rush from the prospect of a bear encounter made all the more enjoyable. I will be returning to Fredericton Junction in the summer. There are covered bridges, and several water falls I can explore. Until next time. 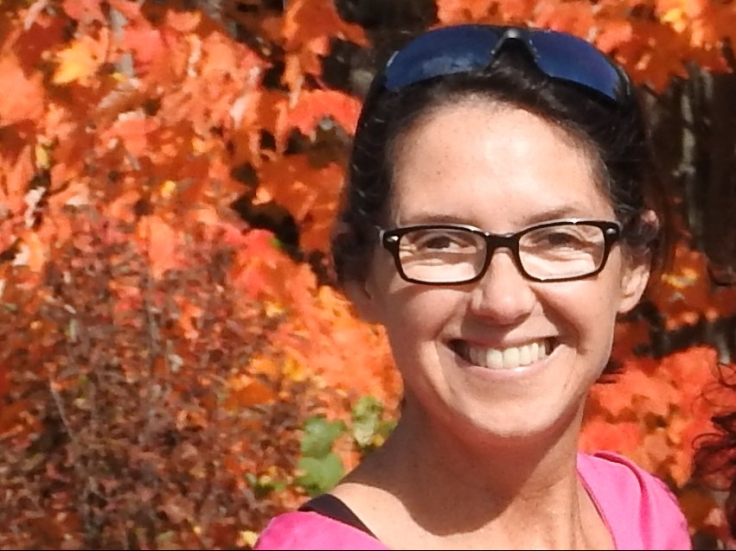 6 thoughts on “Murder, A Moai, and A Hobo, Fredericton Junction”