1.The oldest house is at 325 MacDonald Street. Known as the George Brown Home after the owner. Circa 1840

2. St John Anglican Church on Broad Road, has been a place of worship in Oromocto since 1792, The current church is the third one dating from 1920.

3. Duncan Wilmot, one of the Fathers of Confederation, is buried in the church’s cemetery.  Please read In Honour of Canada’s 150th to find out more.

4. A fire destroyed most of the town in September 1919. It burned thirty homes plus several barns, stores and all three churches before smothering itself out at the river. There was no organized fire department at the time and this event spearheaded what has become The Oromocto Fire Department

5. Fort Hughes military block house is a replica of the 1780 fort that stood on the same spot. 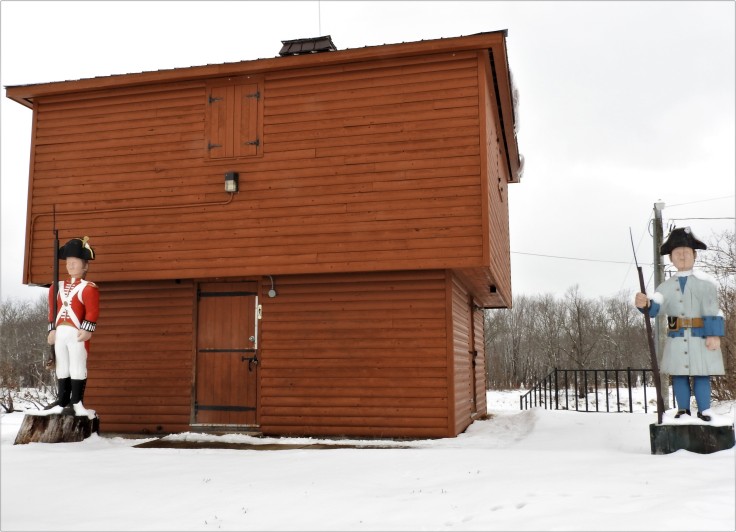 6. There is a difference between the two sculptured soldiers standing guard at Fort Hughes( above); Located at Hazen Park. The one on the left; represent a member of the Royal Fencible American, a Loyalist soldier that garrisoned the fort during the American Revolutionary War. The one on the right is a French Forces solider to represent the many french settlers of the area. They live peacefully together. Created by local Artist Monty MacMillian

7. The Oromocto river is an ancient Maliseet trail to the south coast of New Brunswick, that can still be followed by paddling and portage.

8. The Gathering Place sculpture by Jessie Salisbury, located in Hazen Park, is one of the eighteen sculpture on the Sculpture Trail sponsored by New Brunswick Sculpture symposium  .  They are placed in communities throughout New Brunswick.

10.  You can walk the trails in Deer Park and see the high water flood line on all the trees year round, because the lichen wouldn’t grow lower, it is flood intolerant.

And now you know.