Map of Points of Interest for Saint John

If I had been the young man from the cruise ship in my story Your Travel Wish List Should Include…, what points of interest would make me want to say, “I can’t wait to get to Saint John?” This was my three day list:

I squint at my scribbled list of must-see places. I still have 3,  11, 14, 15, and 16 to complete. It snowed overnight, and I am going to start the day with a hike through the fresh powder.

#3 — Saint John has a famous landmark sign on a hill above the city, just like Hollywood. It was my feature image My Quest for the Forbidden in Saint John. Approximately a five-kilometre drive from downtown, it is visible to all the cruise ships in the harbour. I park in a snowbank just off Osborne Street and hike upward. I’m laying down the first tracks in the snow and I feel like a kid. I’m half tempted to plunk down and do a snow angel. Fort Howe national historic site is also at the top of the hill.  I pass the blockhouse and stone cairns of the historic plaque. I have taken pictures of both in warmer weather. Today they are covered in snow.

When the path divides, I take the southern branch. I am excited to see the sign up ahead. It is very big — I wouldn’t be able to get a selfie alongside it.  The fence is very close to the edge of the cliff and the snow is hiding the footing so I stand safely back a few feet and admire the view of the city. The cloud cover has a silvery tint and the sun is trying to make an appearance. I have arrived at a good time.

#4 — I  didn’t tell you in my last post, The Art of Saint John, that I looked behind the old courthouse to see if there was a dedication or plaque marking the spot where James Cane was hanged for murdering Maggie Vale.  The area is fenced off and under construction so finding #4 is a scratch. Here is the courthouse in pictures I took on a previous visit; the photo on the left is the front of the building, right is the back of the building 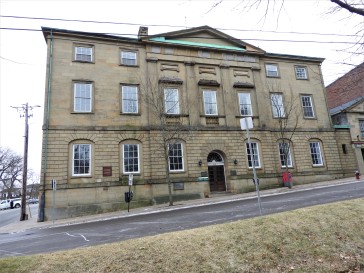 The Old Court House a National Historic site the rear of the building is fenced off and Inaccessible, just a bit pile of dirt.

read of The Old Court House a National Historic site the rear of the building is fenced off and Inaccessible, just a bit pile of dirt now

#5 — In King’s Square there is a blob of melted metal that is said to be all that remains of a machine of some sort found in a hardware store.  You can see gears, nuts and bolts within the mass. History buffs like myself will find the blob underwhelming, but imagine that so little proof remains of a fire so catastrophic that it levelled the town.

#6 — I told you about this one in The Art of Saint John. Miller Brittan was a famous Canadian artist from New Brunswick, and his former studio is now Britts Pub and Eatery.

#13 — After my pint at Britts pub  I headed down  Prince William Street to walk off the beer buzz and to check off #13, The Three Sisters Gas Light. The light was placed to help sea captains safely find their way into the harbour. The light aligned with the steeple of Trinity Church. If all three globes were visible, the approach into the harbour was correct; if only one or two were visible, captains knew they needed to adjust their course for safe passage.

#9 and #10 — I strolled around the alleys and streets looking at the stone buildings of the Prince William cityscape, and I also got a look at the Trinity Anglican Church, which was mentioned in my story On The Trail of Loyalists.

After the great fire 140 years ago, all new buildings were required to be built of stone, brick and mortar. The regulations were meant to prevent such a catastrophe from happening again, but it makes for a lovely old-world appearance.

#7 — Back to the pedway at Market Square to see Deanna Musgrave’s newest mural, Nest. The pedway passes over Chipman Hill Road which is very helpful when strong winds blow onshore and it gets really cold downtown. Deanna’s second mural, Clouds, is located in the Hans W. Klohn commons at the University of New Brunswick-Saint John Campus, which is where I finish my first day. 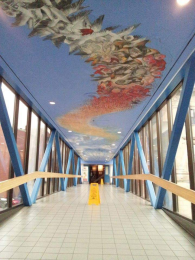 Deanna Musgrave’s Mural Nest inside the pedway from Market Square.

Clouds by Deanna Musgraves In the Hans W. Klohn Commons at the University of New Brunswick Saint

#11 — Old Fort Charnisay is widely unknown to the general public, but it too is a national historic site and the last one I need in order to have seen all those in the Saint John area.  Last night I asked my hostesses at my Air BNB if they knew where it was located. I brought up a picture of the plaque on my tablet, and showed them. One of the women promptly told me the gazebo is in front of the Carleton Community Center. That is where I am headed next.  I have passed it many times but it is sitting at the end of the road — not where I expected.  I sweep off the snow and read the plaque, which states:

It is not on my list today but just down the street in Queen Square is the celebration monument of Pierre Dugua Sieur de Mons (1558-1628). He was founder the first permanent French — or Acadian — settlement in Canada.  He was the first governor of Acadia in 1604 along with cartographer Samuel de Champlain. I am sure I came across a similar plaque with Michel LeNeuf  De La Valliere, Seigneur of Chignecto, also claiming to be first governor of Acadia at Tonge Island (see my post Searching Around Sackville Part 2).

Carleton Martello Tower National Historic Site is also nearby. It is currently under restoration and you can’t go into the tower,  but you can still walk the grounds and get some great photos.  I love the historic stone architecture and it has great views in all directions. This photo is from 2016.

#14 — It is nearing noon, so I’ll scratch lunch at the Reversing Falls Restaurant off my list.

Reversing Falls is a beautiful place. It is at the confluence of the Saint John River and the Bay of Fundy, so when the tide is low the river runs out to the ocean, but when the tide comes in it is higher than the river’s discharge, so rapids, whirlpools and eddies form.  I walked into the restaurant and, since the place was empty, I asked the server if I could look around.  She says, “For sure, take your time!”

The view to the river and bridge is excellent. I take the best seat in the house, table number 106.  I order a bowl of squash soup and a veggie wrap.  I say, “Isn’t this view amazing?”  My waitress nods in agreement and says, “Sometimes we stand here and watch the harbour seals.” She says she never gets tired of the view. Who could? This video is from my seat looking at the transition from slack tide to high tide.

With my appetite satisfied,  I head to Rockwood Park. I mentioned the sculpture Sunshine and Moon Light Over Saint John by sculpture Hiroyuki Asano of Japan located in the park  in my story It All Started With Love. The park has seasonal camping,  canoeing on the lake, and is park of the UNESCO GEOPARKs of New Brunswick. There is a sculpture for unions outside the Frank Hathaway Center, year-round hiking and mountain bike trails. and wildlife viewing.

Board walk along the lake of the UNESCO GEO PARK location 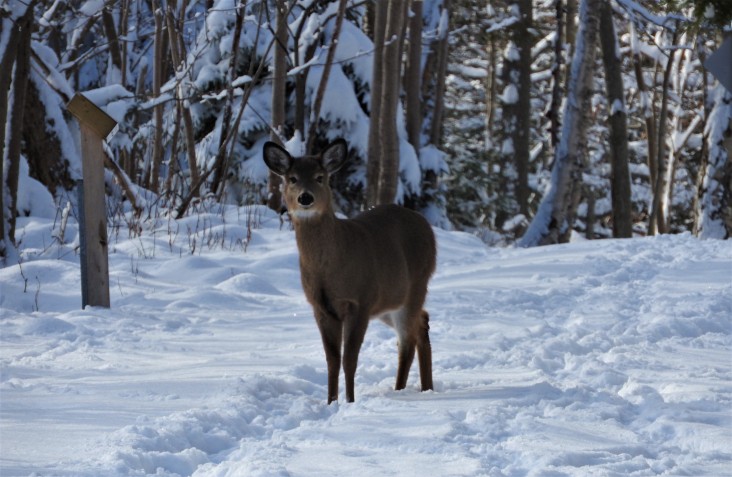 Deer on the trail in Rockwood Park

The lady at the interpretive center tells me if I follow the Fresh Air trail, when I cross the bridge over the brook I should be able to see a series of small openings into a crevasse that is an underground cave system.  “It was the last place to find resident bats up till two years ago, the white nose fungus has killed them off.” She mentioned they don’t tell people about the caves, they don’t want people spelunking in them. I promise I am not a cave dweller, but having something to look for while snowshoeing will make for an interesting adventure.

I park in the busy lot and strap on my snowshoes.  There are lots of ducks at the feeder and several people feeding them.  Deer had been here with in the last fifteen minutes.   A skier has broken a trail, so I start a snowshoe trail off to the side.  Half a kilometre in I start to see the openings,  where the snow has collapsed down inward..

Cave opening through the snow cover

Now that I know where there are, I may return in the summer to have a better look.

#16 — After snowshoeing, I set off for the Netherwood School in Rothesay, the set location of the 1986 movie Children of a Lessor God starring William Hurt and Marlee Matlin.  The snow in the trees looks very pretty. I drive up the curved road and see an enormous mansion. The building are posh and I feel out of place. I snap a quick picture of the school sign and leave.

On the way, I pass a park by the water, it looks beautiful and I have to stop.

All in all, it was another great day of searching around Saint John.  I am sure next trip I will have another full list of points of interest to see. This time I was lucky to find everything but the gallows location behind the courthouse.

Cheers to the rest of the story of Saint John and happy travels from Maritime Mac.

19 thoughts on “Saint John: The Rest of the Story”